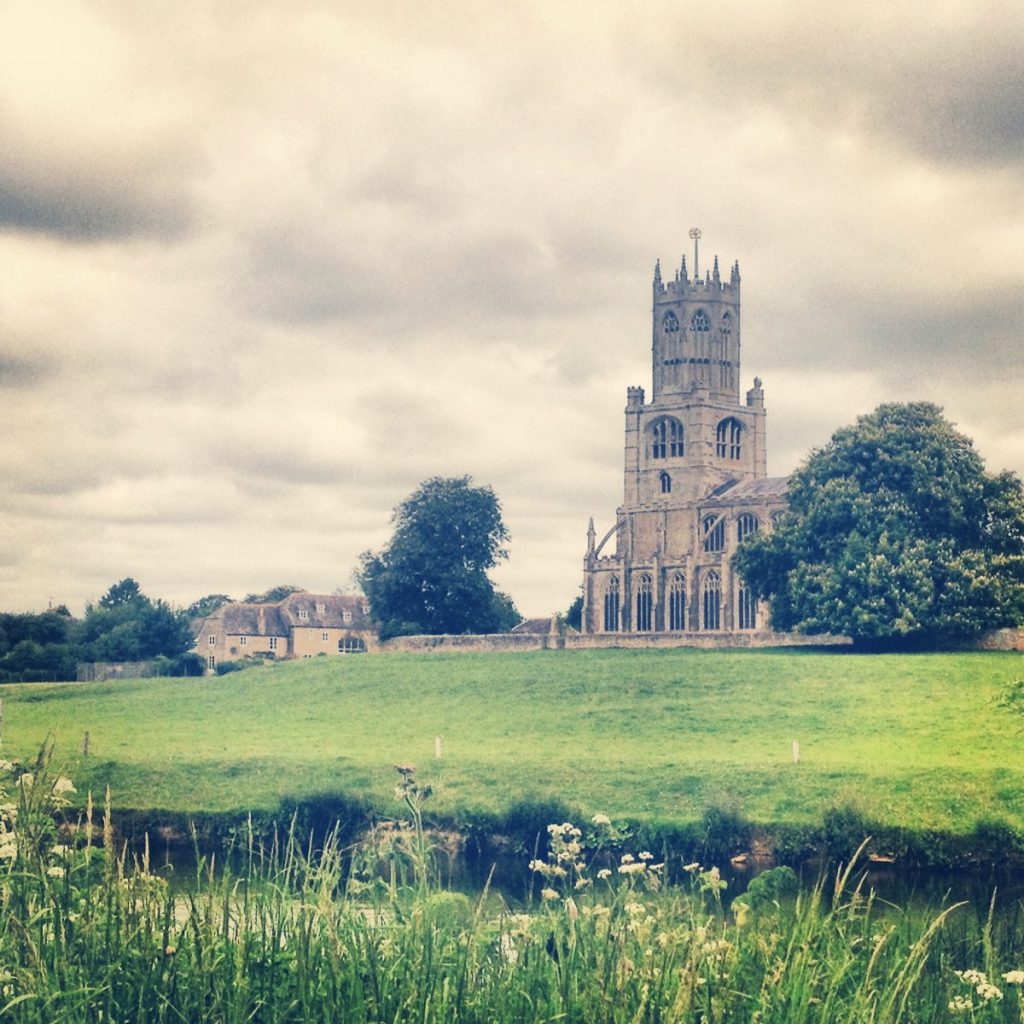 Fotheringhay – another historic site nearby

Fotheringhay is within easy reach of Puddle Cottage

If you are visiting Rutland to enjoy some of the local historic houses and castles, you may want to venture over to Fotheringhay near Oundle which is only 17 miles away from Puddle Cottage. Fotheringhay Castle was the site of Mary Queen of Scot’s execution, and can be combined with one of many lovely walks in the area as well as a wander round the historic market town of Oundle which is only 3 miles away.

On a dismal morning, just over 400 years ago, all local roads in the county led to Fotheringhay castle, where the scene was set for the execution of Mary, Queen of Scots, on the morning of February 8, 1587. With a little imagination you can picture the setting – sandwiched between the River Nene and the Willow Brook, the picturesque village of Fotheringhay was alive with activity, horsemen tethering their horses by the water’s edge, and all the available accommodation filled with commissioners and judges with their retinues. Events leading to the arrest, imprisonment and execution of Mary were quite remarkable, and led to the introduction of religious reformations that were to change the English pattern of life for ever.

Mary, the Catholic Queen of Scots, was born on 8 December 1542, the daughter of James V of Scotland and Mary of Lorraine. Her father died when she was just a few days old, leaving her the Scottish crown, and in 1558, when only 15 years of age, she married Francis, the Dauphin of France, the Scots renewing their ancient alliance with the French. The Catholic community of the two nations believed that Mary should also have been Queen of England instead of Elizabeth who was a Protestant, basing their argument on whether the marriage between Henry VIII and Anne Boleyn was legal. It had not been recognised in Rome, although Elizabeth had been declared the lawful heir to the throne through her decent from Henry VII. In August 1561, Mary returned to Scotland following the death of her husband Francis and in July 1565 married Lord Darnley, giving birth to a son, James, In June 1566 who later became James VI of Scotland and James I of England.

The marriage turned sour soon after James was born and Mary began to take more than a passing interest in David Rizzio, her private secretary. Darnley became insanely jealous, seized Rizzio in her presence and, with the aid of accomplices, had him murdered. The following year, Darnley himself was murdered, and it is thought that Mary and the Earl of Bothwell, who became her next husband, were guilty of the crime. This aroused great anger among the Scottish people and Mary was arrested and imprisoned in Loch Leven Castle, being forced to abdicate in 1568 and agree to the coronation of her infant son as James VI of Scotland. She soon escaped and fled to England, appealing to Elizabeth to help her recapture the throne, by Elizabeth considered her too dangerous a guest and kept her virtually a prisoner for 19 years.

In 1586 Anthony Babington and a priest by the name of John Ballard, were the leaders of a plot to murder Elizabeth and organise a general Roman Catholic revival in England. Phillip II of Spain promised to assist the uprising once the assassination was accomplished, but on August 4, Ballard was captured and under torture, betrayed his comrades. Babington escaped with the intention of going abroad but he was discovered towards the end of the month and imprisoned in the Tower of London, being tried with Ballard and condemned to death for high treason. Pleading for mercy, he wrote to Elizabeth, offering money for procuring his pardon, but was executed along with the other conspirators on September 20 at Lincolns Inn Fields. The detection of the plot led to Mary’s own destruction and although there is no documentary proof in Mary’s own handwriting, knowledge of the intended assassination was sufficient to have her arrested.

She was seized at the gates of Tixall Park and taken away to Fotheringhay Castle where, conducting her own defence, was made to answer the charges brought against her by certain gentlemen of the realm. The judges decided she was guilty and she was condemned to death; Elizabeth delayed the signing of the warrant for two months, being uncertain of how her son, now James VI of Scotland, would take the execution of his mother. James was more interested in succeeding Elizabeth to the throne of England and uniting the two countries, so after rejecting the intercessions made by Scotland, Italy and France, she finally signed the warrant in 1587.

The Earls of Shrewsbury and Kent arrived at Fotheringhay for the execution of sentence on February 7 and early next morning Mary took her seat on the scaffold, praying as she awaited the final blow. Reports of the actual execution are somewhat macabre and contradictory – the wavering hand of the executioner was supposed to have been anything but accurate, the first blow from the axe inflicting a deep wound on the side of the head. It was not until after the third stroke that the head of the unfortunate Queen was held up to the onlooking crowd as the executioner cried – ‘SO perish all the enemies of Queen Elizabeth. Another report talks of the executioner, after severing the head, trying to lift it by the hair, which turned out to be a wig, coming apart in his hand as the head rolled away; the Queen’s little dog is also supposed to have hidden beneath her skirt, refusing to leave the body. She was buried some time later in Peterborough Cathedral by Robert Scarlett, the sexton and gravedigger of the parish, but in 1612 her son, who by now was James I of England had her body removed to Westminster Abbey. The position where her body was buried at Peterborough Cathedral is distinguished by a commemorative tablet placed on a pillar on the southern aisle, and a painting by Zucchero, showing the head of Mary after her execution, hangs in Peterborough Museum.

The tragic death of Mary, Queen of Scots at Fotheringhay Castle 400 years ago made her one of the many casualties of the age, but the castle itself was a place of great significance long before she was beheaded and the castle destroyed. A struggle to power existed when Edward IV died in 1483, with the coronation of the boy king being delayed by Richard taking him to the Tower of London for so-called added protection. Edward was joined by his younger brother, the Duke of York, who was just ten years of age, and anyone capable of assisting the young princes was arrested, some of whom were promptly executed. The outcome of this act was to be one of the most wicked and brutal incidents in history: the murder of the princes whilst they were in the tower. The ambition of Richard to become King had thus materialised and although tradition has it that the princes were murdered at his instigation, this is now considered unlikely. The real villain was probably Henry Tudor, who defeated and killed Richard III at the Battle of Bosworth in 1485. Henry wad crowned Henry VII, marking the beginning of a new dynasty, and a period of great adventure and material progress in our history.

The castle has now all but disappeared. Shortly after Mary’s execution in its Great Hall, it began to fall into disrepair and local people helped themselves to bits of its materials for their own use. The antiquarian, Sir Robert Cotton, incorporated the Great Hall into his manor but the building was destroyed in the 18th century.

The lovely old church still stands, dominating the countryside with its tall octagonal lantern tower elegantly overlooking the River Nene, and surmounted with the badge of the House of York. Within its precincts members of the illustrious York family lie buried, including Edward, Duke of York, who was killed at the Battle of Agincourt in 1415, and Richard, Duke of York, who fell at the Battle of Wakefield in 1460. Despite the choir of the church being destroyed in the 16th century, the York tombs were removed from the ruins, on the instructions of Elizabeth I and the monuments erected in the church, alongside the altar, where they can still be seen today. Other fine objects worthy of attention are the beautiful 15th century painted pulpit (a gift from Edward IV) and the stained glass windows.

If you turn right when leaving the church and walk down the wide main street you will notice what was once a 15th century inn situated on the left-hand side as you approach the bend to the right. This is now a farmhouse, but it is believed to have been where the executioner stayed before carrying out the death sentence on Mary, Queen of Scots. Alongside the cottage is a public footpath leading to the high mound where the famous castle once stood, and where only a token piece of masonry remains. The mound, however, which is now overgrown with thistles and nettles, as well as a variety of bushes, is well worth a climb to the top, where you have a splendid view of the River Nene as it meanders through the meadows on its way to The Wash. After retracing your footsteps back to the main road, it is advisable to turn left and walk in the direction of the village of Tansor. Spanning the River Nene is the picturesque 18th century stone bridge, and if you look back as you cross it, you will get a magnificent view of the church in all its splendour, set in a background of trees – surely the most impressive view of all.

If you are looking to visit the area and explore the area, then why not stay at Puddle Cottage? The 4 star self catering cottage is located in the charming village of Edith Weston and has 1 bedroom and sleeps 2 comfortably and is just a short walk to the South shore of Rutland Water. The historic market towns of Oakham, Stamford and Uppingham are also within 8 miles of the cottage. To book a stay please contact Anna on 07734175291 or enquiries@puddle-cottage.co.uk.