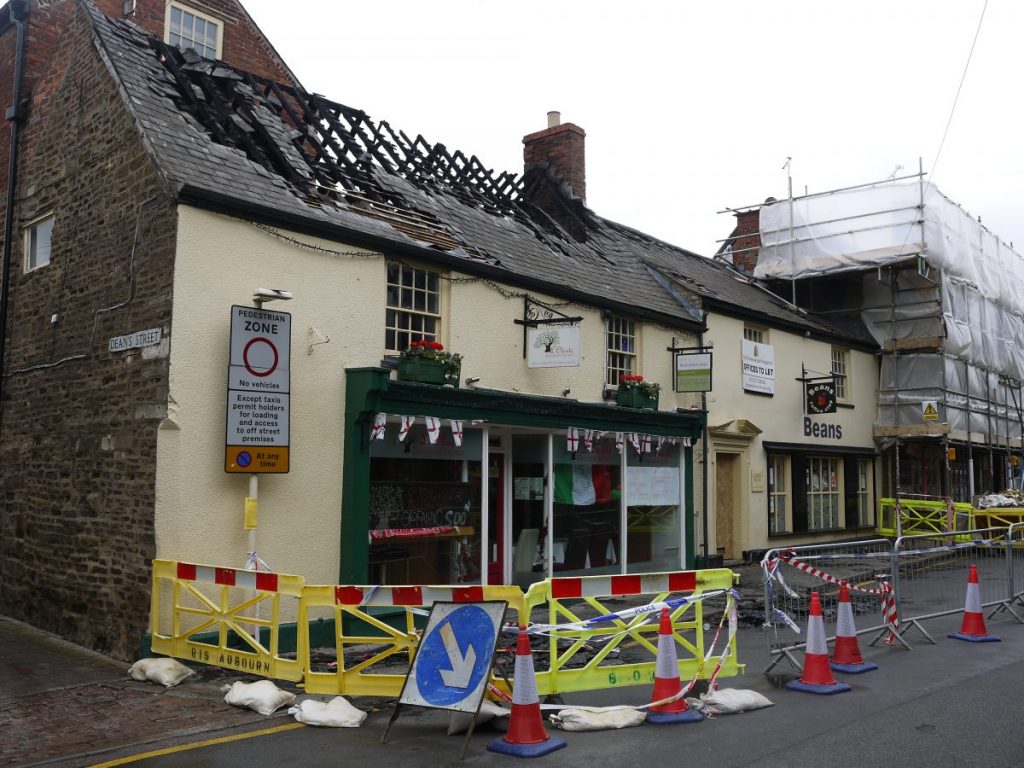 Today we learnt of a serious fire that had taken place in Oakham over the weekend. The Rutland and Stamford Mercury have reported the following:

A RESTAURANT manager says his business will open again after a fire destroyed the roof of the building it is in.

Manager of L’Oliveto in Church Street, Oakham, Ben Ladjimi was called to the restaurant at 1.30am on Saturday to find the building on fire.

He said: “I am still in shock. We were very busy on Friday night and I was the last one to leave the restaurant at 11.30pm. “Everything was fine.”

Reid Associates letting agency based above the restaurant and Beans Coffee Stop next door were also damaged in the fire.

At its peak six fire engines and an aerial platform were at the scene as firefighters fought to control the flames.

By 4am the blaze was out, but fire crews remained on site until later in the morning and Church Street was closed for health and safety reasons.

The fire service believes the blaze was started by an electrical fault in the ceiling above the restaurant. Fire crews had to break through the ceiling in the kitchen to get to the blaze.

Mr Ladjimi said apart from the kitchen ceiling the restaurant was not damaged by flames, but by the water used to put out the fire.

He said: “The important thing now is letting people in Oakham know what happened and what we are going to do.

“The kitchen is damaged because the fire service had to break through the ceiling to put the fire out.

“The restaurant has a lot of water damage to it.

“I think we are going to have to start from scratch and get everything brand new.”

Mr Ladjimi says they plan to reopen the restaurant as soon as possible and make it even better than before. He expects the work to take about five months.

He added: “People in Oakham have been so supportive. I have had people stopping me in the street to say how sorry they are. I really appreciate it.”

A statement on Reid Associates website says: “Due to a recent fire within our office building we have been forced to move to a temporary site pending structural repairs. Until further notice we can be contacted on 01572 724734.

“We apologise for any inconvenience caused and assure you of our continued best attention.”

Karen Gilbert, owner of Beans Coffee Stop, which has its head office in Oundle, said the cafe was closed but hoped it would reopen by the end of the week,

She said the cafe was mainly water damaged, but outside furniture had been ruined after gutters had melted on to it. The slates on the roof also need to be replaced.

The other branch of the popular Italian restaurant is at Normanton, just a short walk from Puddle Cottage. The menu at both restaurants is the same, and the restaurant overlooks Rutland Water.