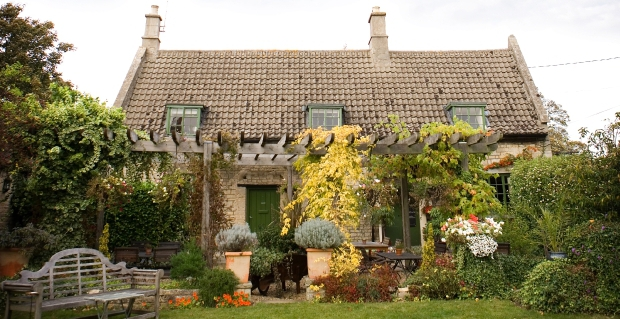 Posted in Eating out in Rutland, Puddle Cottage May 3rd, 2012

The Olive Branch in Clipsham was one of the first pubs in the country to receive a Michelin Star back in 2002 which it still holds. I though this review by ‘holdtheanchoviesplease’ posted on 3 May 2012 was worth sharing and gives a good insite into this very popular Rutland pub.

‘If you’ve got a Michelin palate but not deep-filled Michelin pockets and if you’re ever in the East Midlands, near Clipsham, then you really must go and eat at The Olive Branch. Think sleepy village dating back to the 17th century, houses built with Clipsham stone, topiary trees maintained by the Forestry Commission and a pub which was once three farm labourers cottages.

So how come there’s such a lovely, feel to the place, why does it feel a little home from home? Blackboards, dressers full of books, floor-to-ceiling logs, pine tables and standard lamps. OK, not my home but someone’s and I like this comfortable and unpretentious setting.I discover that the man who once pot-washed at the pub in his teens bought it 15 years later. Sean Hope heads up a young team of chefs in the kitchen of this and his other pub The Red Lion in Stathern. Passionate about using the best of what the local land has to offer you can see this mirrored in the pub menu. There are the classics which sit harmoniously next to the slightly more exotic but don’t expect to see food which has been through a foam gun or been dehydrated to within an inch of its life.

Things began well when they had my gin du jour ‘Sipsmith’ but ended badly when they served it with Schweppes tonic, gents please try Fever Tree it’s a much nicer mixer. I had already ordered before I saw the House Cocktails list which included the ‘Clipsham Cooler’ which has gin, apple juice, elderflower, mint, lemon and ginger ale. But it was the Seasonal Country Cocktails list that caught my eye and the ‘Rhubarb Cocktail’ rhubarb syrup, lemon juice, gin and vanilla essence, topped with soda (£6.75) the non-alcoholic version is (£2.35) an interesting drink if you’re the nominated driver. There’s a good choice of beer, chosen to work with the menu and include light beers, cider, full-bodied blondes, fruit and dark rich beers.

A lovely board of bread arrived, sweet warm wholemeal with a great crust and served with a generous amount of herb and black olive butter.

We ordered a jug of tap water and that was regularly filled, without prompt. The menu is specific to each day and on the reverse there’s a local map with names and locations of the all the suppliers. A great read if the conversation begins to wane.

We had to try the sloe gin pickled quails eggs from the bar menu, a bargain (£3.00) as two shot glasses arrived with three eggs in each. Now coloured pink, these eggs had a perfectly spiced white and the softest creamy yolk, nothing like the pickled, dry hard-boiled eggs I remember floating in formaldehyde-like jars on pub counters.

For starters I chose the tempura battered tiger prawns, big boys coated in a light and very crispy batter. The chilli sauce was livened-up with a little more salt and the prawns were perfection (£9.25). Mister chose lamb which was rolled and stuffed with apricot and spinach and served on a mound of Moroccan spiced lentils. This was belly and the unctuous lamb fat was quite strong, delicately tempered with the apricot and packing a punch with the spicy lentils (£6.95).

On to the mains and we were so close to Lincolnshire it would have been rude for either of us not to have had the Lincolnshire sausages. I ordered those and got a dish of fat overstuffed herby porkers from the nearby Grasmere Farm. They sat on a creamy English mustard mash and that was surrounded by a moat of rich and sweet red onion gravy. (£14.50)

Mr had bone marrow crusted fillet of beef aged for 28 days and this came with farmhouse cabbage and horseradish rosti (£25.00). The steak, had a super herb parmesan crust and was cooked absolutely on the money. The rosti was delicious, large and crispy.

The side dish of roasted Jerusalem artichokes and bacon (£3.50) was out of this world. I don’t think I have tasted a side dish with so much flavour in ages. Artichokes had been roasted and then pan-fried with salty lardons.

We left no room for dessert, even for the ‘small plates’ on offer. Our dining neighbours did and this was no ordinary plate of condensed culinary sweetness, because liquid nitrogen pooled in the base of the serving dish and when the fun ran out there was a jug-full to keep the table entertained.

I had to steal myself away from the shop, conveniently placed by the exit where pickles, chutneys, jams, wine, olive oils and hand creams were on sale. Wines could be ordered and collected from the shop, although they can also be delivered but of course you’ll need to pay the delivery.

Mr spent forever in the gents, not using the facilities it would seem, simply staring at them. He was so in awe of the cistern cover he took a variety of pictures.

My only disappointment is that I don’t live in the East Midlands but we will definitely be back, with friends.

Expect some great things out of the pub in the coming months, they’re offering wine gourmet dinners hosted by the wine makers. The first was on St George’s Day and celebrated British wine. In the summer, Spain is celebrated and at the beginning of the game season there will be a French evening.

The bill including drinks (a gin and tonic and a pint and a carafe of Malbec) was £100 including service.’

Puddle Cottage is only 10 miles from the Olive Branch in Clipsham, as well as being only minutes walk from the banks of Rutland Water.